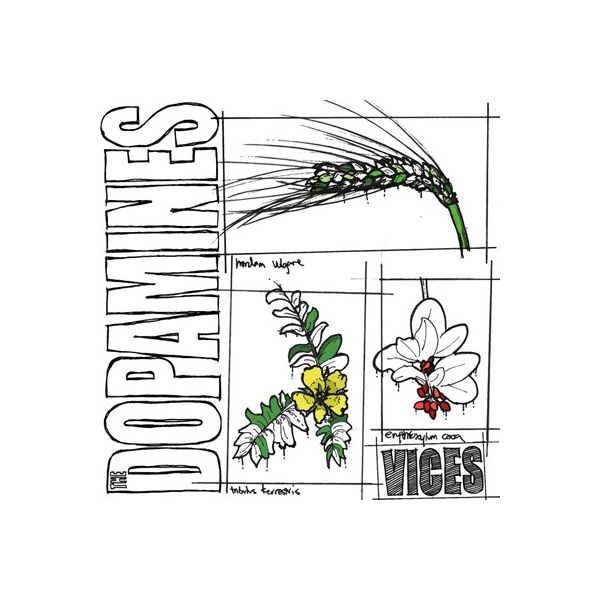 $6.00
The Dopamines have a reputation of being a “party band,” but Vices is no party. It's a hard pill to swallow, and not the fun kind that leaves you falling down the stairs. CD.
Availability: Out of stock
SKU
DOPVICE-CD
Facebook Twitter LinkedIn Google + Email
Add to Wish List
Details
Expect the worst. Nothing has ever happened in your time on this planet that makes any other philosophy hold water. People all over the world have different coping mechanisms against the existential crush. Some find religion, some find suicide, some start a shitty pop punk band and tear through their years in an inebriated rage of blind partying.

Two years ago, three young fuck-ups of the most gentlemanly attributes gave us a most righteous batch of party jams. I believe it was the anarchist Emma Goldman who said, “It's not my black-out drunk, puke-on-everything-I-love party if I can't dance to it.” And we all had a great time buying thirty Keystone Lights, nailing cans to the drywall, and coming home and pissing in the sink.

Things are different now. Jon Lewis, who just two years ago bemoaned the success of those around him, now works in an architectural firm; but, the taste of success can taste like shit to pallet saturated with the low life. Jon Weiner lost his girlfriend, his job, and like seventy pounds; but, when there's less of you, there's less for you to self-respect. Michael got his party plates and doesn't work at that nice shitty mall anymore, trading in the esplanade for a dim, sunless warehouse; but, that hardly matters when you're working third shift.

Life's not all shit, just most of it. Sometimes something amazing happens. Like when a group of musicians become masters of their craft and make something better than previous experience would dictate they are capable. Vices is that kind of a well-crafted masterpiece. And it actually forces you to take The Dopamines seriously, something I couldn't have really imagined. It is a rare breed of record that knows exactly what it wants to and does it. Ten songs, not even twenty-five minutes. It's like the record drank as much Michelob Ultra as Jon Weiner and just shed the excess. There is not a superfluous second on Vices, each moment is presented with urgency and immediacy.

Lewis and Weiner have perfected their Cincinnati harmony. Michael beats his drums with the fury of a man who only knows being kicked when he's down because he only knows being down. The guitar rings true and over Weiner's bass chords. Aided by the expert production of Matt Yonker at Drastic Studios in Nashville, this record stands high above The Dopamines' previous output.

The Dopamines have a reputation of being a “party band,” but Vices is no party. It's a hard pill to swallow, and not the fun kind that leaves you falling down the stairs. If Expect The Worst was the raging party last night, this record is the long, hard look in the mirror the morning after. This time around, The Dopamines are dealing with the shit they got fucked up to forget about. And the list of shit to get fucked up to forget about flows longer than the Ohio River.

Lyrically, it's dark. Jon Lewis contemplates going off his meds, choking someone until they die, and splattering himself on the sidewalk. Weiner's fighting with his girlfriend and finding himself abandoned and alone to weather the biting winds of life. This record is less about getting fucked up and more about still being fucked up while sober. The theme of partying, both recreational and under prescription, does rear it's head again, not in a celebratory manner, but as a matter-of-fact statement about needing to get fucked up to forget how fucked up you are, though the record seems to present getting fucked up as more of a symptom than a cure. There's a lot about medicating on this record, trying to alter ones state of being and body chemistry, be it through getting wasted with your friends, taking the pill your doctor thinks you need, being in love, and even just playing in a punk band.

But, Vices goes beyond the typical pop-punk-as-white-boy-blues routine. There are some existential moments. Jon Lewis more than once wrestles with the idea of how to live your shitty life in this shitty world where nothing is guaranteed to work. At times, there's some implied hope, but not without plenty of cautionary this-probably-isn't-going-to-work messages thrown in. It is never said that you should not at least try to escape the darkness, but it is never explicitly delegated into the realm of the tacitly possible. The feeling parallels the words of Jack Nicholson in One Flew Over The Coo Coos Nest - "But I tried, god damn it, at least I did that.” Lewis is happier playing to a handful of kids in a basement than he ever is at the office. Indeed, being in a band is the only thing in the lyrics that isn't besmirched with at least a little regrettable pain. Wittgenstein, who professed his work in philosophy was an attempt to ease the pain of life, was asked on his death bed about it. He said “It helped, but not much.” I see this as a directly analogous to being in The Dopamines.

Yet, somehow, the record doesn't sound dark. It's full of catchy tunes, and only when you get them in your head and start singing along do the pieces all start to come together. This record is a paradox, and a damn catchy one. Hooks reveal themselves to be full of terrible thoughts, inescapable and growing louder. Herein lies the real trick to Vices, what really sets The Dopamines apart from their peers. They make the darkness sound appealing by sweeping it under a rug of harmonies and melodies. And by the time you know the record's secrets, you can't walk away from it.

Everything on Vices works together so well. It amazes me how a group of dudes with so little going for them can make a record with so much going for it. And before you know it, it's over. You start it up again, catching a buzz during your first listen. By the end of the second, you're wasted, pants around your ankles, pop punk perfection blasting out of your stereo, completely unaware that this might actually not be an appropriate group of songs to party to. But who cares? Life is shit.

So, we expect the worst, because it's all we have experience dealing with. It's all we know, it's all we have, it's what we are. But whether slowly through the years or quickly with a handful of pills, we have an awesome new record to jam while we kill ourselves.