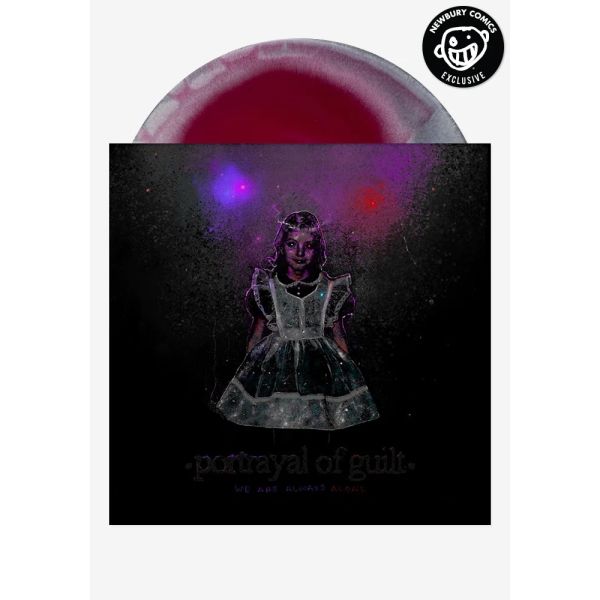 PORTRAYAL OF GUILT- "We Are Always Alone" LP (Blood Mix)

$22.00
We Are Always Alone is portrayal of guilt's unrelenting and pitch-black new full-length album, out via Closed Casket Activities. The band, who dominated 2018 with high acclaim from the likes of NPR, Noisey, Stereogum, Decibel, Kerrang!, Revolver, The Needle Drop, AV Club, Brooklyn Vegan, Metalsucks, Metal Injection, and more with their groundbreaking release, Let Pain Be Your Guide, return with a shape-shifted and scorching new sound through nine tracks - proving to be more uncompromising and inventive than ever. Recorded in early 2020 at Cacophony Recorders in Austin, TX with Phillip Odom and featuring guest appearances from Mack Chami (Terror Cell Unit, God Is War) Chris Taylor.(Pg. 99, Pygmy Lush) and Matt Michel (Majority Rule), We Are Always Alone ignites a game-changing, razor sharp, and unique new chapter for the band. Obscuring lines and bending all genre norms, portrayal of guilt shatter the extremes of screamo, hardcore, black metal, death metal, powerviolence, and noise to reveal their strongest and most compelling material to date. Dripping with dread and apathy, each track of We Are Always Alone, shows the band coping with a splintered society. portrayal of guilt have written the soundtrack and gospel to a world on fire and have set the standard for 2021! *Newbury Comics exclusive color vinyl pressing on Blood Red, White & Metallic Silver Mix vinyl! Limited to 500. Closed Casket Activities.
Availability: Out of stock
SKU
PORTRAYAL OF GUILT- "We Are Always Alone" LP
Facebook Twitter LinkedIn Google + Email
Add to Wish List