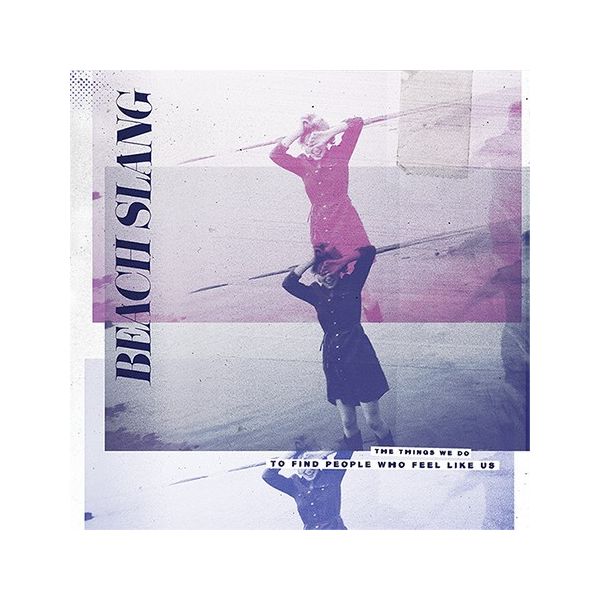 Luckily the band's full-length The Things We Do To Find People Who Feel Like Us is the culmination of their collective career and picks up where their two critically acclaimed 7-inches, 2014's Cheap Thrills On A Dead End Street and Who Would Ever Want Something So Broken? left off.

The feelings of youth and vulnerability lie at the core of Beach Slang's music, which is part punk, part pop and all catharsis. It references the ghosts of the Replacements but keeps one foot firmly rooted in the present. It's fun and it's serious. It's sad but it isn't. It's Beach Slang.

This Philadelphia-based act have built their hype the old-fashioned way, without any gimmicks or marketing teams, which makes sense when you consider that frontman and writer James Alex cut his teeth in the celebrated pop-punk act Weston while drummer JP Flexner, bassist Ed McNulty and guitarist Ruben Gallego also played in buzzed about projects such as Ex-Friends, Nona and Glocca Morra respectively.

However there's something indefinable about Beach Slang's music that evokes the spirit of punk and juxtaposes it into something that's as brutally honest as it is infectiously catchy.

"By and large we subscribe to the idea of "if it isn't broken, we're not going to fix it' so, yeah, we came at this recording in very much the same way," Alex explains when asked how they approached the new songs from a sonic perspective. "I mean, we had more time to make this album, which is a cool thing, but time can also be a strange overthinker.

Really, we've just always wanted to make our things sound like well recorded live records." he continues, adding that the biggest difference this time around is the fact that engineer Dave Downham stepped up to co-produce this album and the fact that the band has finally found a full-time fourth member in guitarist Ruben Gallego. "Having both of them and their ears involved definitely helped a lot. I hardly listen back to things in the studio. For me, if it feels right, it's a keeper. But, yeah, there's something pretty alright about striking a balance."

Obviously there has been demand for a Beach Slang album since they exploded onto the scene, however the band was very careful not to rush out something before it was totally ready. "I write every day regardless of what else is happening. And what we wanted to make happen was as many live shows as possible. There's an importance in that, a necessity. Rock & roll isn't meant to exist on computer screens, you know?"

Correspondingly the hundreds of shows that the band played between this album and the EP is all now automatically embedded in their recorded output. "I'm hardly concerned about our music being technically precise. I want to make sure it has soul, that it's honest. The imperfections…that's the really good stuff. We don't ever want it to be perfect."

While The Things We Do To Find People Who Feel Like Us further expands on Beach Slang's unique sound, it also showcases their sonic diversity. From the shoegazing sheen of "Noisy Heaven" to the downbeat dreaminess of "Porno Love" and refracted rage of "Young & Alive," the album is a fuzzed-out masterpiece that takes influence from the past while staying rooted in the present. "Certainly we are going to sound like Beach Slang because, you know, we are but we didn't want to make this record a xerox of anything we've done. That stuff has no guts, you know?," Alex explains. "Even if you go from the first EP to the second EP there's a nice, little arc and range of things happening. I think that's even more true of this record."

"There's a line in that first song 'Throwaways' that goes 'there's a time to bleed and a time just to fucking run": I've sung that line so many times between developing and writing the thing and I still get that little-hair-standing-up-on-my-arm moment every time I say it," Alex says. It's probably because the sentiments that he's expressing have never been a choice. "Certainly there's an element of nostalgia inherent in the writing because a good bit is reflective but it never lodges in the past; it's more of a battle cry to now and where we're going. Look, growing up and getting serious is wildly overrated stuff. Don't listen to it. Jump around with a guitar. Play records loud. Never retire from being alive. Move on it."

That movement is alternately beautiful and crushing. It's blazing and plodding, silent and deafening but always progressing and pushing toward that barely visible beacon in the horizon. The Things We Do To Find People Who Feel Like Us is just a giant step closer to our destination.