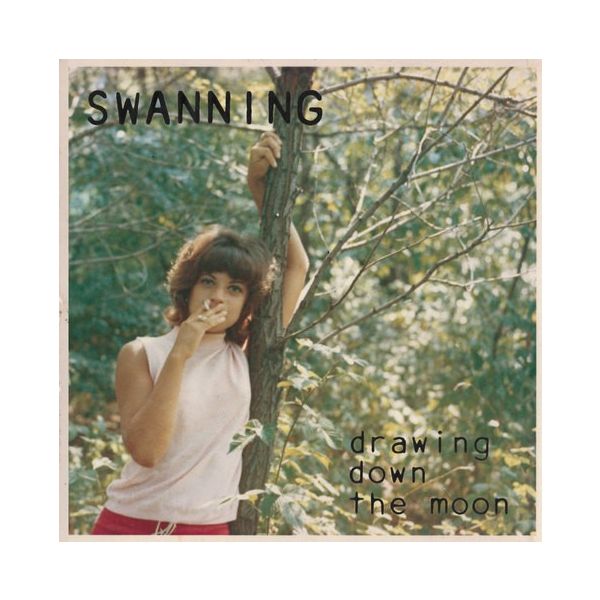 SWANNING- "Drawing Down The Moon" 12"

Schemmer’s logged time as the guitarist in Radiator Hospital and has played with a number of other Philly-based groups, which naturally gave her access to a crew of ace musicians to round out her band: Jenn Twigg (the Ambulars, Attendant, Fraktur) is the bassist, Jeff Bolt (Radiator Hospital, Swearin’) plays drums; Ali Donohue (Fleabite, Perfect Pussy) joined the rest of the band’s lineup as a guitarist after they finished recording Drawing Down The Moon with Kyle Gilbride in a Philadelphia basement.

Schemmer gets the spotlight here, though, and her artistic voice is one that’s trying to create a life that’s informed by loss but not defined by it. “Drawing Down The Moon is about more than losing my mother — it’s an exploration of all the white space in between,” Schemmer says. “What people don’t often tend to recognize is how such a death informs every aspect of your life, from how you connect with others to how you connect with yourself, and how that grief and its effects are constantly shifting. These songs are about where this loss placed me in the world, for better and for worse. They are about the toxic relationships, the right to be angry, the people who held me up, and the tearing down of self-hatred. At its core, Drawing Down The Moon is about evoking progress and radical growth.”

Drawing Down The Moon certainly sounds determined to progress. The name of the project itself hints at the lack of momentum that caused Schemmer to hold off on making music for herself in the first place — Swanning’s Bandcamp page once read: “It’s been ten years since you left, and I’ve been swanning around ever since. Until now.” — and each song sees Schemmer asserting herself and coming into her own in different ways.

“Downtown” is a striking portrayal love deteriorating due to one party outgrowing the other (“You say I’m ruined, but you seem the same/ And I don’t think I like you as much as I liked you yesterday”); “Lily Of The Valley” gets its name from a highly poisonous plant and looks at a relationship fated to end: “There’s no sun in a windowless room, and there’s no soul in another song about me and you.” The closing title track takes all of the vividly-realized interpersonal observations from the rest of the 12″ and sends them up to the stars: “I am just another moon of Jupiter/ One of 67, I fall back in line,” she opens. “Jovian, I still believe in you. We are of one damaged mind.” Schemmer has a knack for making the smallest of shifts seem world-changing, and Drawing Down The Moon is an intimate portrait of someone determined to make the most of those shifts and get better." -Stereogum