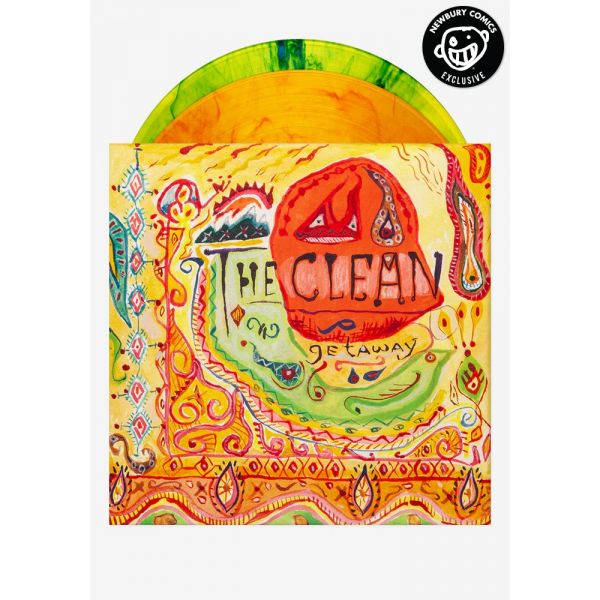 $32.00
2001’s Getaway may be the best illustration of whatever mercurial, inexplicable musical power animates The Clean. After the band’s initial rush of activity between 1978 and 1982, the trio lay dormant until the end of the ’80s, when a string of reunion shows inspired the Kilgours and Scott to start recording again. After three well-received albums in the first half of the nineties—1990’s Vehicle, 1994’s Modern Rock, and 1996’s Unknown Country—The Clean disappeared again until the end of the decade, when another tour inspired another record. While playing gigs across New Zealand in celebration of their original label Flying Nun, David says they brought along a TEAC 4-track quarter-inch tape machine. “As usual, we started jamming and recording, and before you know, we thought we may be onto an LP.” Speed and spontaneity ended up defining Getaway. Robert says, “I remember writing ‘Silence or Something Else’ while the others went for a long walk. It was done by the time they got back. I probably would have gone for a straighter version, but I still like it.” David remembers, “Hamish wrote the instrumental ‘Jala' in about five minutes in a motel outside of Turangi.” At one point in the process, Yo La Tengo’s Ira Kaplan and Georgia Hubley were visiting from America, and they ended up on the record too. Getaway came out in August of 2001, with cover art by Hamish who says that his original artwork was the actual size of a compact disc case. After that, The Clean set out on another tour—including in New York City, where they happened to be during the terrorist attacks on 9/11. They coped with the tragedy by playing gigs with their American friends, and staying in the same creative space they’d been in since before they started working on the album. “I remember we did some great gigs on the New Zealand tour, debuting some of the new material,” Hamish says. “‘Stars’ was a favorite for the big 12-string sound.” A live version of the pulsing, soaring “Stars”—along with a couple of other Getaway songs and Clean classics like “Fish,” “Side On,” “Quickstep,” and “Point That Thing Somewhere Else”—appear on the rare 2003 album Syd’s Pink Wiring System. That record is included with the Getaway reissue, along with the more experimental, piano-driven EP Slush Fund, from the same era. These bonus tracks reinforce the idea of the Getaway-era Clean as especially plugged in, generating inspired and beautiful music almost on instinct. Indeed, they’ve done justice to a key album in The Clean discography—a record that honors the band’s origins as garage-rock-loving New Zealand kids, excited just by the hum of a good, cheap amplifier. Songs like the twangy, easygoing “Crazy,” the jaunty acoustic snippet “Cell Block No. 5,” and the trance-inducing “Circle Canyon” are more fine examples of Scott and the Kilgours’ interest in immediacy and a strong vibe, applied to catchy melodies. “Each album is a completely different beast,” Robert says. “We all change in different ways between each one, bringing different things to the table, and sometimes bringing nothing much at all.” But if Getaway proves anything, so long as all three members of The Clean are in the same space at the same time, anything can happen. Album includes a digital download. *Newbury Comics exclusive color vinyl pressing. 1 Yellow with Red Swirl LP, 1 Yellow with Blue Swirl LP!
Availability: In stock
SKU
CLEAN, THE- "Getaway" 2XLP (Swirl)
Facebook Twitter LinkedIn Google + Email
Add to Wish List Add to Compare