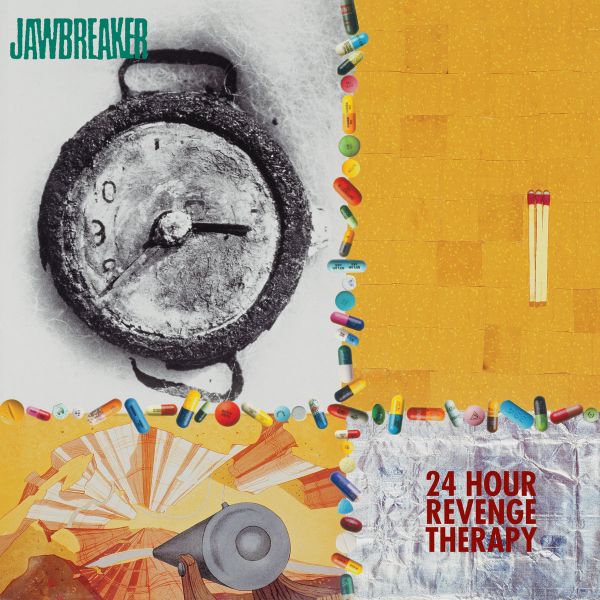 $22.00
One of the most popular and successful underground bands of the early- / mid-’90s, California’s Jawbreaker was comprised of Blake Schwarzenbach (guitar and vocals), Chris Bauermeister (bass) and Adam Pfahler (drums). The band melded raw vocals, a driving rhythm section and grinding guitar with complex song structures and literary lyrics, forging a distinctive style that has since, along with Schwarzenbach’s subsequent band Jets to Brazil, influenced a generation of independent music. By the end of 1993, Jawbreaker was in full stride. The band had completed a full US tour in the summer, played several shows that October with Nirvana, and was attracting significant major label attention. 24 Hour Revenge Therapy, released in early 1994, was Jawbreaker’s third album. After the more “progressive” Bivouac, the trio had returned to a straightforward, poppier sound, and the resulting full-length is widely regarded as their best. The bulk of the recording was done by noted independent producer Steve Albini (though it is officially credited to Albini’s cat, Fluss). Following the mainstream success of fellow Californians Green Day and Rancid, Jawbreaker decided to sign with DGC. They released a final studio album, Dear You, before calling it quits in 1996. A feature-length documentary on the band is currently in the works. BACK IN STOCK! Just one of the best punk records ever made! Blackball Records.
Availability: In stock
SKU
JAWBREAKER- "24 Hour Revenge Therapy" LP
Facebook Twitter LinkedIn Google + Email
Add to Wish List Add to Compare