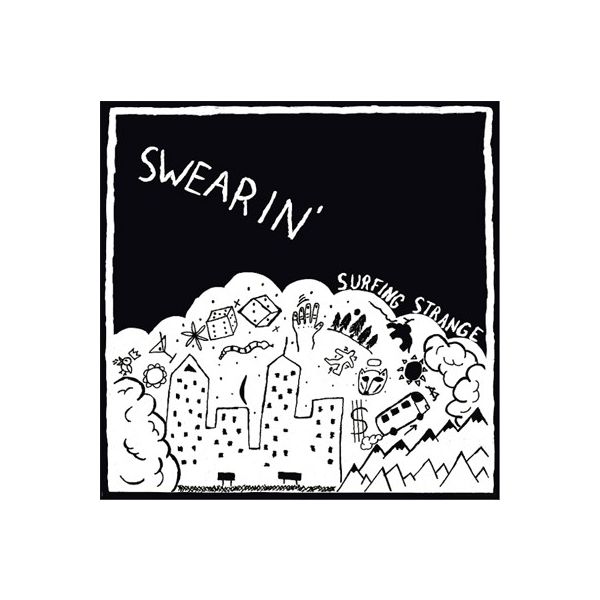 $5.00
"With Surfing Strange, the band slows down and stretches out, piling on further layers of grimy distortion and even the occasional guitar solo. Unfortunately, Swearin’s touchstones seem to be catching up with them, and the result is a strong album that nevertheless feels overtly, distractingly derivative in spots."
Availability: In stock
SKU
SWEARINSS-CD
Facebook Twitter LinkedIn Google + Email
Add to Wish List Add to Compare
Details
"On their self-titled debut, Swearin’ burst right out of the gates and refused to slow down, if more metaphorically than literally. Swearin’ was high-energy blitz laced with insightful, tune-oriented songwriting, and when it came out I spent hours with it in my headphones, the landscapes of Czech Republic, Austria, and Italy flying by. It was a very nativist thing to do; here I was in a foreign place, and yet I was so devoted to that one genre I’ve only heard done right in America: pop-punk. Somewhere, a boombox plays Take Off Your Pants and Jacket, and a bald eagle swoops in to grab the royal baby.

In any case, the straightforward power of Swearin’s energy left its influences less as name-checks than things you glance at in your rear-view mirror, already passed by at night. With Surfing Strange, the band slows down and stretches out, piling on further layers of grimy distortion and even the occasional guitar solo. Unfortunately, Swearin’s touchstones seem to be catching up with them, and the result is a strong album that nevertheless feels overtly, distractingly derivative in spots.

But first, the good parts: singer-guitarist Allison Crutchfield turns in across-the-board excellent songs, particularly opener “Dust in the Gold Sack” and “Loretta’s Flowers”, a slowly-strummed ballad. Crutchfield’s grasp of melody remains impeccable, and when her tongue-twisting rhymes line up with the right combination of notes, the result will simply never leave your head. I know this for a fact. “Kenosha” can be hummed on command, 18 months out from its release.

The best songs from also-singer-guitarist Kyle Gilbride stick to your ears like gum but rattle around inside like steel wool, and it’s his compositions that most ably employ the increased heaviness on Surfing Strange. First single “Watered Down” is full of delightful crunch and there are moments where everything but the feedback cuts out, and it is probably the most fun to be had on the record. It’s propulsive, exciting, catchy, everything this style of music should be. Gilbride has also turned down the whine that used to power his vocals, less bratty now than sardonic. In the moments when this all lines up, from either Crutchfield or Gilbride, there’s no one that can touch them, not in the whole damn scene.

Unfortunately, there are frequent moments when Surfing Strange doesn’t live up to that standard. “Echo Locate” and “Glare of the Sun” seem to have gleaned their vocals directly from Sebadoh and My Bloody Valentine records, respectively, and the former ends on a very Dinosaur Jr.-style solo. Of course, you could allege this about pretty much every guitar band making music today, as I’ve just named three of the biggest indie-rock touchstones of the past 20 years, and it’s not like we’re approaching Yuck levels of mimicry here. “Echo Locate” wisely blows up after a soft opening, and the talk-sing vocals of “Mermaid” that could have been found on just about any mid-‘90s rock album simply disappear, never to return, after Crutchfield enters the picture.

The issue is not that these influences are new, because they’ve always been there. Instead, they’ve never been this overt, less reprocessed than repurposed. Whether through enthusiasm, energy, or skill, this problem was repressed, or at the very least sanded over, on the debut album. Not so on Surfing Strange. This is hardly a fatal flaw. Like the best pop-punk, Swearin’ is emotionally direct, projecting their fears, loves, anxieties directly onto the listener, practicing the audience-as-canvas motif favored by contemporaries like Good Luck or High Dive. Their influences simply mitigate that directness, distracting from the heart-to-heart connection the music thrives on. I have no doubt in the future that Swearin’ can break that wall down."